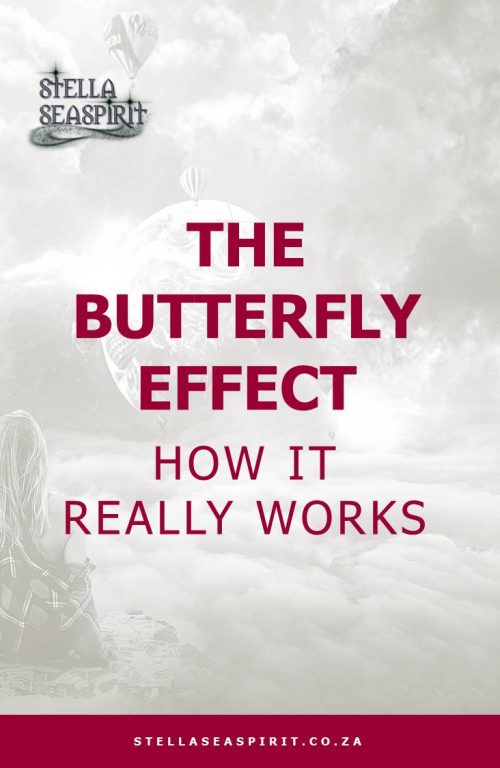 Reader Question: “I have read elsewhere that dabbling in even some simple good spells can wreak havoc on people’s lives.

Like the old butterfly effect story where a butterfly flaps its wings somewhere distant that causes a tornado somewhere several weeks later.

This makes me sad and afraid. I worry that dabbling in even very good spells to help someone can hurt the people around the spell by manipulating situations for a spell to work.

After I felt like I could take some control over my life at last, this information suddenly disempowered me and I felt fear and sadness again. I certainly don’t want to inadvertently ruin someone else’s situation by the law of cause and effect. Please clarify this for me. Thank you.”

Causes do not create events or situations

In my opinion, the butterfly effect refers to small changes being made that lead to a significantly different outcome. Much like shifting your perception, transforming energy and/or casting a spell to create some kind of change in circumstance.

The randomness of the outcome depends on the initial conditions you set forth before you amplify them with thought, emotion, word and deed.

{I’ve written before about essential criteria for getting your spell to work and how to prevent negative side-effects. I have also posted about the misconceptions surrounding the concept of karma and that there is no cut and dry cause and effect. Only what you perceive to be so. Thus I won’t repeat all of that here 😉 }

That said, the original phrase refers to the butterfly’s wings as the catalyst for changes in the atmosphere that may alter the path of the tornado, delay, accelerate or vanquish the tornado altogether.

What this means is, causes do not create events or situations ~ they are catalysts within a series of conditions. In each moment, since the present is where all your power resides, you have the ability to set new conditions based on your personal choices that are influenced by your beliefs.

You have the ability to alter the reality you experience in the pause between breaths. With each amplified thought, mindfully selected word and aligned action. You can’t control the flow of cosmic law and principles but you can use your conscious awareness to become a mover in the game of life instead of an oblivious pawn.

Think of each moment of your day as if you are standing in front of a set of revolving doors.

Based on what you are thinking or feeling in that moment and what belief is currently shaping your perception, whichever division you step through will lead you into a slightly different parallel reality.

For example, it will appear as though you have stepped into the same parking lot from exiting a building but in that revolving door all possibilities reside and the sequence of events that follow as you step into the parking lot will play out differently in each one.

It is possible that the space you occupied in that revolving door as you exited set the potential for the tornado to unfold but you cannot ever fully predict the outcome because in any moment a small choice you make can alter everything.

Similarly, the parking lot you left to enter the building may not be the one you return to and the building itself which you entered hosts different scenarios within it determined by your state of being as you entered the doors.

In all the parallel realities that exist, all possibilities are occurring and playing out anyway. Nothing you do creates another event. Your vibrational accord determines which one you step into as with all the other players in the game.

Ultimately all of this unfolds within a Greater Whole with its own self-organising tendencies. Your human mind may hold a mental impression about what you are creating but the matrix/universe/whatever your preference has a reality of its own, independent of the parts.

So you cannot fully control the things that happen along the way but you can consciously transform your energy to yield the most desirable quality of experience on your journey.

*I Am Witch. I don’t have to isolate the cause, only shift the stream of catalysts.*

Own it. You know you want to.

Does Casting a Spell Have Negative Side-effects?

Does performing ritual open you up to all kinds of ills?

How to Cast a Spell That Doesn’t Cause Harm