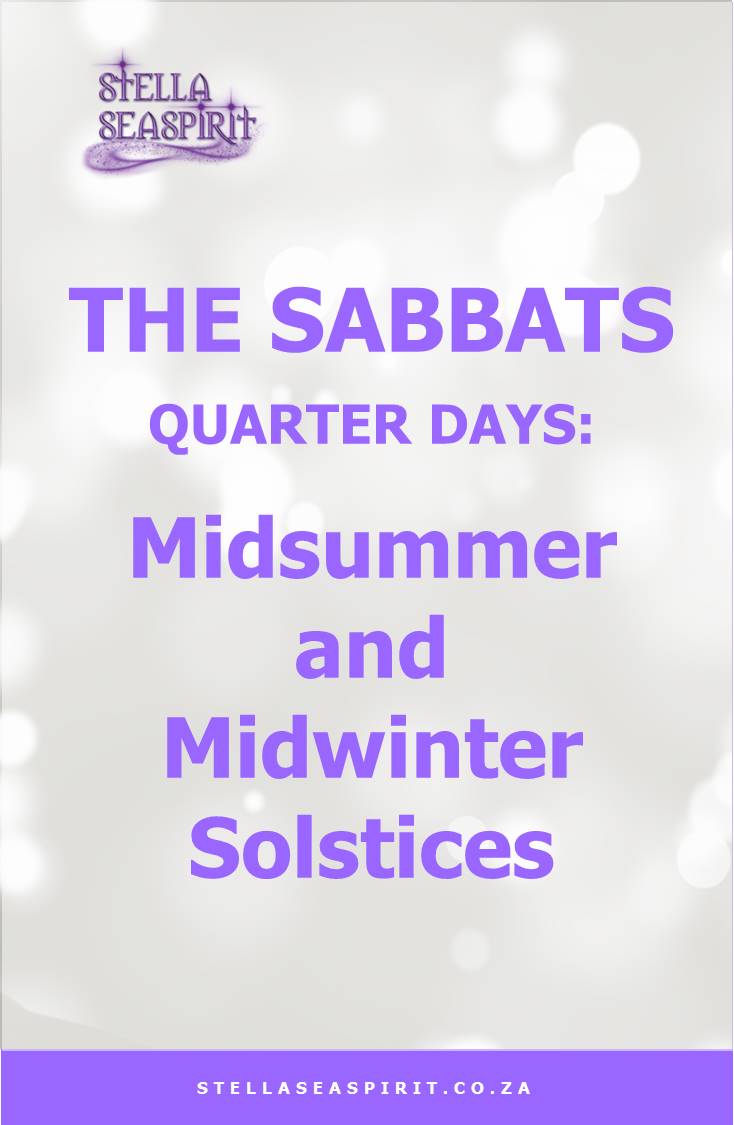 Why this event is significant, how to celebrate whether you are in the Southern or Northern Hemisphere and what you can use the energy of this seasonal turning point for.

The two solstices and equinoxes that occur each year in June and December and September and March respectively, are referred to as Quarter Days as they quarter the year.

Typically Sabbat celebrations begin on the eve of the festival at sunset and continue until sunset the following day. Some celebrate on the day only whilst others begin the day before and finish the day after, for example, sunset on the 21st to sunset on the 23rd.

There is no specific protocol for celebration but there are some underlying themes that tend to remain the same throughout the ages.

Why Is This Significant?

The word solstice means “sun standstill” referring to when the sun reaches its highest or lowest point in the sky at midday.

Every time we have a solstice the sun (in tropical astrology) is moving into the cardinal sign of Cancer in June or Capricorn in December, the energy of these signs are initiatory.

There is a substantial change in the electromagnetic field of the Earth for the few days before and after solstice, which allows us to access higher level information.

This is the reason why ancient peoples held ceremonies on these days, because they were aware that the veil became thinner, to access the new wavelength of incoming light codes and frequencies which is beneficial for us in order to shift and refine our consciousness, both individually and collectively.

Simply put, it is an opportunity for us to access a stream of super consciousness; very high frequency starlight showers the planet at these intervals.

Think of them as cosmic software updates, but for human biocircuitry to a new version for the next three months.

How you can consciously engage this energy

• In the Southern Hemisphere is traditionally celebrated 21, 22 or 23 December. (Exact astrological point around December 19 – 23)

• In the Northern Hemisphere is traditionally celebrated 21, 22 or 23 June. (Exact astrological point around June 19 – 23)

Other names associated with this Sabbat include Midsummer’s Eve, Litha, Whitsuntide and St. John’s Day.

It’s a time to enjoy the fullness of the season while remaining mindful of the seasons’ turning, honouring the Sun’s life-giving power having reached its zenith and the productive Earth ~ literally and metaphorically.

Even as we revel in the magic of Summer, we are reminded that Winter is coming (haha GoT fans) whilst preparing for “harvest-time” to reap the rewards of your efforts.

The Sun’s strength begins to decline after this festival despite the long, full days and hot nights. Daylight now decreases by about a minute each day, heralding the approaching return of darkness. The waning/dark half of the solar year begins.

Bonfires are lit at dusk to honour the abundance we have received. Participants gather with friends and family and engage in lively feasting. There are activities around fire such as drumming, dancing and singing. Some stay up all night to welcome the sunrise.

Traditionally Yule logs or wreaths from the winter solstice are disposed of in the midsummer bonfires, gifts of food are left out for Fae folk in acknowledgement of the Nature Spirits and bells are worn on clothing, wrists or ankles to attract them.

The Elemental realms have completed their prolific tasks, the veil between our world and theirs is thin, and they rejoice with us basking in the Earth’s splendour.

It is an ideal time to perform creative magick or Fae magick, for gathering and drying herbs, fashioning enchanted dream sachets, handfastings/weddings and child blessing ceremonies (after Beltaine).

• In the Southern Hemisphere is traditionally celebrated 21, 22 or 23 June. (Exact astrological point around June 19 – 23)

• In the Northern Hemisphere is traditionally celebrated 21, 22 or 23 December. (Exact astrological point around December 19 – 23)

Winter’s harshest days are yet to come as Nature rests through the cold months. The seeds in the ground wait for more heat and light to germinate and sprout. The energy of introspection, personal renewal and regeneration is palpable.

It’s a time of kindling the light within during the darkness without; a powerful phase for revelation through dreams, contemplation and reflection. The Sun’s power gradually gains as daylight increases by about a minute each day. The waxing/light half of the year begins.

There is emphasis on the return of the light when the sun is “reborn” in its strength, continuing the cycle of rebirth, life and death, recognition of the inexorable continuity of the wheel of life. Thus wreaths are made symbolic of the never-ending cycle of life and evergreen trees are decorated.

Traditional colours used in décor are green, red and gold representing the green new life to come in Spring, approaching warmth and the Sun.

Some celebrants burn a Yule log for twelve hours on a fire to represent the blazing of the Sun. It is also said to bring good luck. Prior to burning it is often decorated with pine garlands, pine cones, acorns, mistletoe and red holly berries. Wishes for the coming year are written on dried leaves and burnt on the log.

Time is made for visiting friends and family to honour them, strengthen bonds and exchange greetings. Group games are played in cosy living rooms. There are lavish cooked feasts and much merriment which metaphorically attracts the abundance of the season to come.

Gift-giving takes place amongst friends and family. This is figurative of providing gifts of knowledge and spiritual understanding to each other during this sacred time of reflection.

However, the practice of gift exchange more than likely evolved from the trading that took place at this barren time of year where one traded what one had for what one required during the Winter months.

Traditional gifts include honey, pastries and candles. Organic gifts are given to the Earth and animals as a symbol of gratitude and plantation blessing (wassailing) is performed.

This Sabbat is also associated with fertility because of the seeds waiting beneath the ground to be stimulated to grow. Kissing under Mistletoe is said to bring fertility whilst fertility rites for other avenues can be performed such as planning your year ahead and sowing thoughts and intentions for your goals.

No matter where you are take some time to:

• Honour the gifts inside you that are already emerging

• Raise your vibration and extend your awareness into higher consciousness

Ready to start incurring change in your life this season?

Book a bespoke solstice rite with me (available for 3 days only).